I remember when first study Feldenkrais they thew out fancy words like distal and proximal.  Wikipedia has a fairly clearcut definition and I’ll use it here to make a point.

The terms proximal (from Latin proximus, meaning “nearest”) and distal (from Latin distare, meaning “to stand away from”) are used to describe parts of a feature that are close to or distant from the main mass of the body.[9] Thus the upper arm in humans is proximal and the hand is distal.

To try to analyze whether technique should be focused on distal or proximal movements is a little like trying to answer the question:  Which came first, the chicken or the egg? Because while it’s true that movements of the arm and back effect the lower arm, wrist and fingers in much the same way shock absorbers handle the weight of a car or the bristles of a brush react to the movements of the artist, it is also true there are times the body must make ‘micro movements’.  These micro movements are accomplished with the distal parts of our bodies. And while its still true these movements rely on the support of the back and arm, the most obvious activity may seem to be occurring in the hand and fingers.

In bow arm technique, string crossings are a clear example of distal and proximal movements. At a slow tempo, a player will very likely change the level of the bow arm using the elbow to adjust to the string heights. However at super fast speeds, in cases like a moto perpetuo or any nos. of examples of having to cross strings quite rapidly, there is simply no time to adjust the elbow height for every string crossing but must instead be accomplished by the adjustments of the hands & fingers relative to the strings. 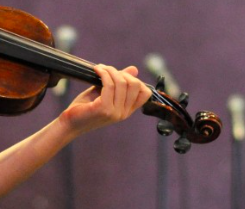 Lovely relaxed wrist allowing hand and fingers to ‘fall back’ in relation to wrist.

Recently a video has become popular because it is an X-ray of a string player’s left hand. With all due respect for whoever did this demonstration, I believe it best demonstrates the error that is most typical of players when it comes to understanding how to move most efficiently with the left hand.

There is a very practical reason for considering the distal and proximal relationships in violin and viola technique. Simply put, the distal movements can be likened to the broad strokes while the proximal, those movements and technique that can be done more efficiently with micro movements.

Initiating movement in the fingers & hand vs. the wrist for quick passages and learning to move efficiently.

Much like the example above of crossing strings with the elbow vs. the hand & fingers, there are times in left hand technique when the upper arm & elbow are doing most of the moving such as shifting and sweeping movements in slower tempos but other times when it must be left to the hand, fingers and wrist to maneuver quickly and easily. The wrist, for example, comes around the violin so the relationship of the fingers to the string can be correct on the G and D strings. While the fingers are doing their share of reaching the lower strings, if the wrist & hand are not in the proper relation to the fingers, ones left hand will feel strained.

But there are also important instances when the fingers must do the micro movements but it is also contingent on the wrist being sufficiently flexible, making full use of ones range of motion.  Most players are taught the hand and fingers can pivot forward for vibrato and reaching the 3rd and 4th fingers.  But what about the potential for the hand & fingers to relax back, relative to the wrist.

What is the definition of a virtuoso? While virtuosity encompasses many qualities, with respect to a players technique, it is perhaps best expressed as the ability to do difficult things easily.

Look carefully at the hand movements in the video.  Notice how it is the wrist that is initiating the movement from the 4th finger to the 1st finger. In a very fast passage this can cause excessive strain. The reason is simple.  The fingers and the relaxed falling of the hand in relation to the wrist, is ultimately the most EFFICIENT way to reach back. Sure, many players opt to lead with the wrist, but in the final analysis, can we actually say its the most efficient movement, relative to the body’s functional potential.

SIMPLE MOTION STUDY FOR THE WRIST & FINGERS 1. Begin this simple motion study by relaxing the left arm to the side.2. Bend the elbow, bringing up the hand so fingers are facing towards oneself. 3. Allow the forearm to drop down then come back up again from the ‘hinge’ of the elbow. Notice when doing so there is a chain reaction where the hand falls backwards from the wrist while exerting very little effort to do so. 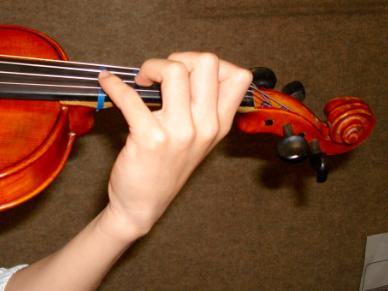 A typical example of inefficient movement can be seen in this photo. Notice how the wrist is bending the right of the image while the pinky is reaching in the opposite direction to the left.