Having the opportunity to study with Karen Tuttle on viola was a great one for so many reasons, not the least of which was working with a teacher who set an example as a human being.  But Karen was an inspiration for another important reason. She studied with William Primrose, arguably the most naturally gifted violist in the past century, but she struggled to understand the technique that while seemingly effortless on his part, reflected an efficiency in movement and economy of movement that she longed to quantify, to somehow make sense of in her own playing and way of teaching her students. This ease of movement was at the heart of his virtuosity and what she hoped to someday replicate. Working with Karen Tuttle helped awaken such possibilities for me as well while in her studio at Peabody and beyond, when I sought to find ways to play difficult works easily, which is the hallmark of a virtuoso. 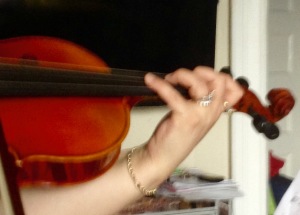 Wrist bent away from instrument causing greater distance to cover to reach the notes played with pinky.

The notion that each finger could have a feeling of weightiness if the wrist and hand were sufficiently relaxed was a cornerstone of her approach to left hand technique and her understanding of Primrose’ playing. And the ‘positioning’ of the wrist, so commonly seen in string technique, where the wrist is bent away from the instrument, is a typical example of making things more difficult for ourselves. Most players and teachers encourage a ‘stationary’ position of the wrist and the fingers are somehow expected to reach the strings. Presumably with enough practice and ‘stretching’ of the fingers, it will eventually become a reliable approach.

How then to conceptualize finger motion in relation to the wrist?

The short answer is, if we allow the wrist to ‘release’ and ‘reset’ for each note, one can find a a way to release the wrist ‘in’,opposite of the ‘static position’ approach often taught, where the wrist pokes out. While releasing and rebalancing may sound like a lot is going on in the left hand with every new note, allowing the wrist to relax and 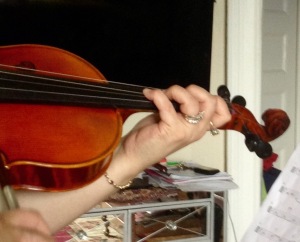 reset after every note will eventually become a seamless and comfortable part of ones playing making playing much easier and pain free than otherwise. Reaching for the 4th finger will fill easier because the distance will be shortened since the wrist will not be angled opposite the direction the fingers are going.

The thumb is a key part of the equation!

What does the thumb have to do with a comfortable wrist? The thumb is generally the one of the first indications that there is too much tension and excessive effort in playing.  Typically players will squeeze the thumb along with the fingers in an effort to depress the string using effort. this of course is the opposite of using the fingers natural weight and allowing that weight and ‘hinge action’ from the base of the knuckles, to do their thing. 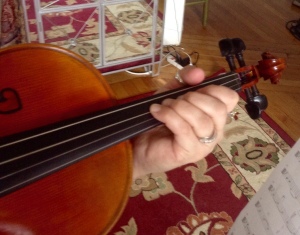 Notice how high the thumb is in relation to the neck of the violin. With a thumb this high up,the fingers are restricted in their reach.

A simple motion study can facilitate the observation of possibilities with the wrist.  Key is the students ability to observe without judgment and constant inner dialogue about the relative merits of ones playing. Thinking and feeing together enable the brain to kinesthetically notice the level of ease vs. excessive tension in the hand.

(Special thanks to Rosanne Vandemark for being the model in these photos.)

Please note, comments must be approved before they are published