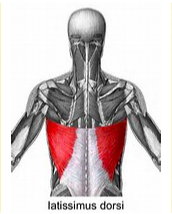 That ‘coming from under’ feeling can be accessed rather than using the shoulder to control bow arm.

Some of the most common beliefs string technique beliefs is  that somehow the back should be involved when playing, particularly when it comes to bowing. This can seem illusive at best since for many it seems like the shoulder wants to be the fulcrum for controlling arm movements bow technique rather than the the illusive back. Monitoring excess tension and elevation in the shoulder are a constant challenge. So which muscles exactly are we talking about when we say back muscles and how on earth can we access the the back muscles including the lower trapezius and latissimus dorsi  under the scapula. Making sense of this muscle and utilizing it is a key component that will go a long way towards allowing the shoulder to be more of a reaction to the of these muscles rather than the point of control in raising the arm to play as well as the entirety of the bow stroke.

And while it seems string players wonder how to solve the accompanying sloping shoulders and excess tension in the neck, it seems equally true that these attributes also seem present when not playing, i.e. in ones general posture. Which came first – the chicken or the egg?  In this instance one wonders – did poor posture influence a players bowing technique or have the practicing habits in the players technique influenced ones posture in a general sense?

Rehabilitation pioneer, Vladimir Janda (1928=2002) recognized a physical pattern comprised of a collection of imbalances which he referred to as the ‘Upper Crossed Syndrome.’ Upper crossed syndrome is characterized by over use of the upper trapezius, levator, sternocleidomastoid, and pectoralis muscles, while under using the deep cervical flexors, lower trapezius, and serratus anterior. Visually the clues to recognizing ‘upper crossed syndrome’ include sloped shoulders and head jutting out from base of neck. In short, this is similar to the posture many string players utilize as they jut forward the head in an attempt to secure the instrument while sloping the shoulders to play and experiencing pain in the neck & shoulders! 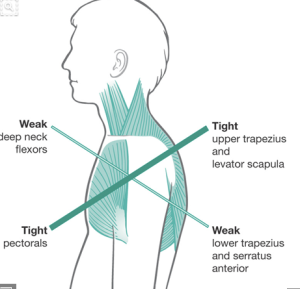 As the shoulders protract, the scapular shoulder blade stabilizers become inhibited and weak. Muscles that are normally quiet are utilized to help stabilize the shoulder girdle. According to Janda the result of this syndrome leads to overactive pectoralis minor, upper trapezius, levator scapulae. Rehabilitation pioneer, Vladimir Janda, called this collection of imbalances an “Upper Crossed Syndrome”.

Students with a genuine curiosity about their technique can, over time, improve posture in a general sense through observations made in the practice room. While teachers are important because they help point the way, ultimately some of the most valuable learning happens when we make discoveries for ourselves where our own bodies provide the necessary information to self correct.

‘Micro Practicing’ describes the kind of work where the most basic components of ones movements are isolated and ‘observed’. Differentiation is a key component because ‘noticing a movement’ has to have a reference point. The reference point is really ‘healthy and efficient movement’ or comfort vs. discomfort.  Its where the humerus bone tends to hang in shoulder girdle when muscle habits aren’t torquing the humerus bone forward.  If the player has ingrained a ‘bad habit’ to the point where it becomes the ‘new normal’ then recognizing patterns can seem nearly impossible to do. 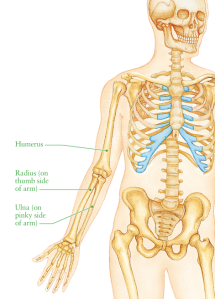 Noticing positioning of humerus bone when shoulders are not slouching.

So the starting point for accessing and properly utilizing the latissimus dorsi and other underutilized muscles can begin by noticing at what point the shoulder and upper trapezius muscles begin to take control of elevating the elbow. So long as the player is overusing these muscles to control elevation of the elbow and the bow arm in general, the player will eventually feel a chronic level of tension and tightness in the shoulders & neck.

Notice the natural position of the humerus bone in relation to the shoulder girdle. Most string players tend to thrust the shoulder forward or curve the shoulder which creates a myriad of technical issues as a result.

Starting With How We Elevate The Elbow In Preparation To Play

Micro practicing can involve elevating the elbow away from the side of the body minutely. By minutely we mean barely any movement at all. But in this tiny motion one can access the sensations of the latissimus dorsi right underneath the scapula. Allow the arm to rest back to the side. Elevate the elbow once again, this time a light higher then drop back down to the side.  When doing this micro movement be sure to notice the point at which the shoulder and trapezius muscles try to take over the lifting of the arm. While the shoulder does engage eventually when raising the arm for the string player the ideal is to discover the ability to utilize the fulcrum relationship with the bow arm that is initiated from under the scapula.

Learning to access the lower back underused muscles rather than the neck & shoulders is the starting point to healthy bow arm. One of the main reasons is that the weight of the back & arms can best be utilized this way vs. hovering over the string. Once we’ve established this feeling learning to make circular movements initiated in the elbow will facilitate dropping weight of back and arm into string. Technique also effects the sounds being produced. So long as the upper traps & shoulders are relied upon to control the bow, the player will tend to use vertical pressure from the fingers, hand, etc. Such pressing action may lead to crushing the sound vs. a producing a round sound. The elbow will end up being higher than the wrist while the tense neck & shoulders will cause the arm weight to hover above the bow.  Some players get a false sense of security from this type of control but the player may also discover this type of ‘control’ leads to pain and fatigue vs. release both on a physical and emotive level when playing.