The idea that the joints of the hand/wrist/arm have a cause and effect relationship with each other seems to run counter to a technical approach that encourages a more rigid ‘positioning’ when holding the bow. In the previous blog we discussed the need for agility in the left hand, which is dependent on a fluid feeling in the wrist and fingers. Much the same way the left hand wrist should have agility and not be too rigid when moving from note to note, the bow hand also needs to be agile and the wrist is key to achieving flexibility. Buoyancy in the wrist is key because the hand must be able to literally balance in relation to the bow and depending on whether one is playing at the frog, middle or tip, the hand and fingers are adjusting to the weight and angle of the bow on the string. 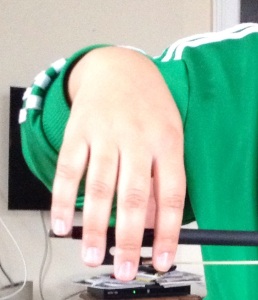 Fingers and wrist dangle above bow before weight creates reaction in wrist & fingers in relation to instrument.

While different schools of technique have various opinions about the positioning of the wrist, almost none discuss the  value of having an agile wrist vs. a rigid one.

There are teachers who expound a low wrist and others that insist the wrist should be higher in relation to the fingers . A slight variation on this encourages players to have the wrist at an angle, which is ensured by keeping the pressure primarily expressed on the index finger.

Karen Tuttle was the first person to open my eyes to another way of understanding the role of the wrist. She taught me to be aware of the weight of the bow in relation to the hand. For example at the frog, the weight tends to balance on the pinky.

The wrist is key because it responds to the weight of the arm & back and feeds that weight to the fingers/bow/instrument. Similar to a shock absorber in a car, the wrist absorbs the ‘shock’ of the weight and simultaneously responds to the balanced relationship with the bow.

Wrist lowers in response to weight of arm into the string

Definition of shock absorber: A shock absorber (in reality, a shock “damper”) is a mechanical or hydraulic device designed to absorb and damp shock impulses. It does this by converting the kinetic energy of the shock into another form of energy (typically heat) which is then dissipated. (Wikipedia)

In the case of the wrist as a shock absorber it disperses the weight of the arm and back in relation to the bow.

imple motion study of picking up a pencil similar to how one would pick up a bow. Allow the pinky to bend and straighten and notice the intimate relation there is with the bow, If one straightens the pinky depressing the tip of the pencil, the opposite end of the pencil will point in the opposite direction.orb and damp shock impulses. It does ths by converting the kinetic energy of the shock into another form of energy (typically heat) which is then dissipated. A shock absorber is a type of dashpot. Wikipedia.

Learning technique can seem like an intense and arduous task.  And yet the biggest leaps in ones technique can be arrived at by taking what may seem like baby steps in the practice room. A very simple motion study provides a perfect opportunity to ‘notice’ what the wrist is doing and capable of doing. A Kinesthetic approach to practicing means the player can think and feel at the same time. While it may seem like a logical goal that the wrist become ‘flexible and adoptive to weight’ giving the brain actual feedback of whether its rigid, stiff, collapsing or awkward at balancing the bow. While some of these conditions might seem negative, observing the stiffness, the parts of the hand that have difficulty balancing and giving the brain unfettered connection to those experiences is exactly how the body learns best to make technical changes leading to genuinely effortless technique.

Simple Movement Study.
When approaching the string feel how the wrist responds. Is it effected by the weight of the arm? Or does the wrist remain rigid?